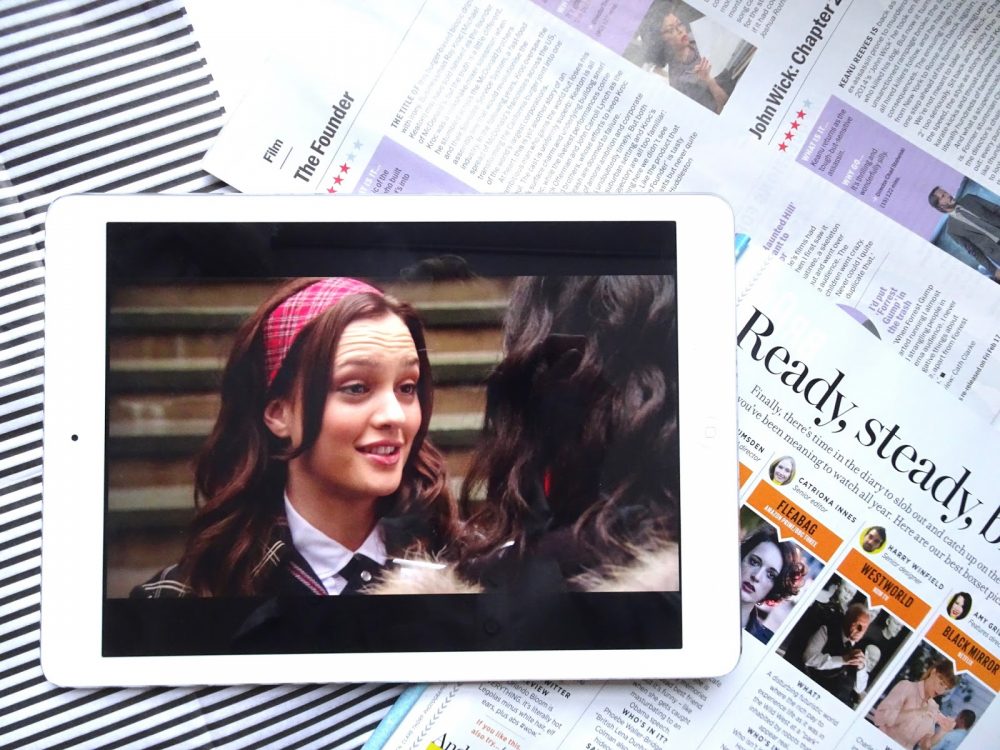 Now I know that Gossip Girl is probably not really old enough to be considered a TV Classic just yet, but I have no doubt that it will be. In fact, I only finished watching the series about a month ago, and it’s already heading that way for me.

Around the same time that I began work on my dissertation, I finally joined the 21st century and downloaded Netflix. This was a potentially dangerous move, I know, but I managed to muster enough strength to banish myself to the library each day throughout the process.

I’d seen the first series of Gossip Girl years ago, back in the day of buying boxsets (I’ve never sounded so old), but didn’t get round to buying the later series, which is why this show was top of my list.

I don’t want to go as far as saying the thought of returning home to Gossip Girl got me through my long days in the library, but let’s be honest, it was about as exciting as my social life got for the final month or so. My conclusion: if you haven’t seen Gossip Girl already, WHAT ARE YOU WAITING FOR?! Okay, so I appreciate that this genre of TV isn’t for everyone, but if you are partial to a bit of scandal, precarious situations and a lot of sass, then this is the show for you. And here’s why you need to watch it…

Blair Waldorf is everything. I haven’t met a Gossip Girl watcher who doesn’t want to be her. You have of course heard of WWBWD (What Would Blair Waldorf Do, duh).

On a serious note, Blair Waldorf must be one of the best written TV heroines of our time. In spite of all the rather ethically questionable schemes she plots against, well, everyone, you can’t help but see beyond her spiky exterior defences and learn to admire each and every eye-roll and hilariously catty remark.

Gossip Girl here, your one and only source into the scandalous lives of Manhattan’s elite.

Come on, everyone wants an insight into how the other half live. A boy who rides to school every day in a limo? A girl with her own sidekick-worthy maid? Fascinating stuff.

You mean your boyfriend’s dad has never dated your mum? And your best friend’s girlfriend didn’t turn out to be using him to stalk you to get revenge for your mother faking evidence to send her brother (and your school teacher) to prison? Wait what, you’ve never had a parent come back from the dead?!

Okay, so Gossip Girl has had some pretty unrelatable storylines, but nearly everyone’s been through high school, had fallouts with friends, rebelled against their parents and suffered heartbreak. And these are the moments that concrete your relationships with even the most unusual characters.

Whilst falling out and threatening never to speak to each other again is a big part of Serena and Blair’s friendship, their relationship can pretty much survive anything. Even though they’re very different people and have contrasting outlooks on life, their ability to accept the other’s flaws is what gives them such a compelling friendship.

Regardless of any fights between them, terrible things they’ve done or catastrophes they’ve caused, they’re always there at the end of the night to sit amongst the mess and forget about the mistakes they’ve made.

Plus, any friend who whisks you off to France when you’re down is a keeper: If you’re going to be sad, you might as well be sad in Paris.

Fashion is a huge part of Gossip Girl, with Blair’s mum owning a fashion label, Jenny attempts to become a designer, Serena’s frequent appearances in the paparazzi and Blair’s fashion-led philosophies.

There are so many great outfits, stunning dresses and pieces of fashion wisdom to choose from over the seasons, but this one probably tops my list…

Maybe my favourite thing about Gossip Girl are the amazing one-liners, most of which come from the voiceover of Gossip Girl itself. Whether it’s a comeback, an insult or a topical pun, every episode is filled with the best quotes.

Better batten down the hatches, B. Looks like your island in the storm was just hit by a Bass 5 hurricane.

Thanksgiving may be over, but I hear that our favorite Upper East Siders are still cooking something up. And pretty soon everyone is going to feel the heat. Of course when you fan an old flame sometimes you wind up just getting burned. And having to start from scratch.

Okay so that last one’s a four-liner, but who’s counting…

If anyone says they don’t enjoy a good scandal, they’re lying. From betrayal to deceit, Gossip Girl doesn’t do simple. So if you think you’ve finally worked out who’s on whose side, you’re probably wrong.

Although where there’s scandal, there’s usually a Georgina Sparks.

Having only seen the first season before, I couldn’t understand the Chuck Bass obsession. But by the end of the third season I was fully on-board.

The Blair and Chuck plot is arguably the focal point of the show, and it’s certainly a story like no other. Before beginning the second season I never thought I’d say this, but there were only a few times I cried or got a little emotional watching Gossip Girl, and the majority of these incidents were down to Blair and Chuck’s encounters.

In spite of all the strange and often ridiculous things that force them together and apart, and the numerous reasons they ought to be completely incompatible, you are always kind of hoping they will end up together.

It might seem odd that a show based on a bunch of self-centred, manipulative and narcissistic rich-kids can have morals at its core, but at its
deepest Gossip Girl isn’t about the scandal and betrayal. It’s about growing up and learning who you are and who you want to become. It’s about making choices and learning from mistakes. It’s about forgiveness and loyalty. It’s about the importance of friendship and family. And most importantly it’s about stepping away from all of your high-school insecurities and beginning to show the world the real you.

10. To Find Out Who Gossip Girl Is

…you know you love me xoxo Gossip Girl

Any cookies that may not be particularly necessary for the website to function and is used specifically to collect user personal data via analytics, ads, other embedded contents are termed as non-necessary cookies. It is mandatory to procure user consent prior to running these cookies on your website.